This is the project I did for MemoryWorks...you can find the original post
--->MemoryWorks Blog
I homeschool all four of my kids. That means four different grades multiplied by 6 or 7 different subjects, meaning somedays it's impossible to determine who has done what without asking them, which means I have to interrupt (and distractions mean it takes awhile for them to get back on track) or if I am working with one child and someone finished their work they need to know what else to do again, meaning an interruption. I wanted to create something that the kids and I could determine what schoolwork had been done and what still needed to be accomplished.
Enter in the Simple Stories Ele.ment.ary kit. MemoryWorks sent me this collection to play with but how was this "homeschooling mom" going to use this more traditional school kit? Fanning through the papers several were lined "chart style" and that gave me an idea. I wondered if I could create a reusable chart that would show me at a glance what the kids had already done and show the kids what they still needed to accomplish for the day.
I tossed around a few ideas, laminating, cork board, dry erase but the one that made the most sense was a magnet board. Something that would allow me to change subjects based on the day and allow the kids (younger ones especially) a sense of accomplishment marking off what they had finished.
I started with a sheet of metal. Instead of purchasing something new, my husband (for some reason known only to him) saved the side panels of our old dishwasher. He cut down one of them to fit a frame I picked up at the thrift for $2. I had refinished the frame with a light crackle coat (layered gold and cinnamon for those wondering) I wanted the frame to have the same vintage-y "old school" feeling I got from the kit. 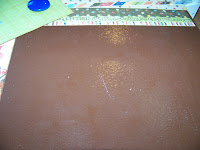 I then laid out papers and embellishments to suit my purpose. 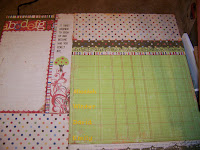 I did need to add several lines to the green paper to have enough spaces for all of our subjects. I used a "metal" embellishment glue stick to adhere things to the metal sheet and then covered everything with several coats of "paper mod podge" (I love mod podge!) I could have used the mod podge to stick things down with (especially since it was heavier cardstock) but I have a tendency to be VERY generous with the mod podge and didn't want my paper to buckle. For my title I inked chipboard pieces and then instead of mod podge-ing them with everything else. I did them separately. Some types of ink can run when it's applied so to solve that I did them by themselves, let them dry and then glued them on. 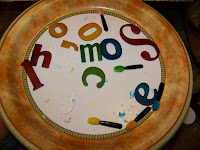 To create the subject magnets, I used the printable elements from the simple stories collection (the do it yourself word tabs) I photoshopped the words on the tabs before I printed them out on cardstock and then ran them through the Xyron 900 with laminate/magnet backing. The markers used to check off when a subject was completed were made by adhering glass stones to scraps of cardstock with glossy accents. (I coated the backsides as well before adhering sticky back magnet strips to them.) 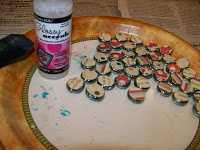 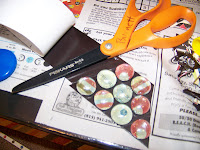 Overall I was quite pleased with the way this turned out. The kids were thrilled to be able to KNOW what had to be done during a particular day and love to be able to "mark off" when something is done. Best yet I can see at a glance who has done what! 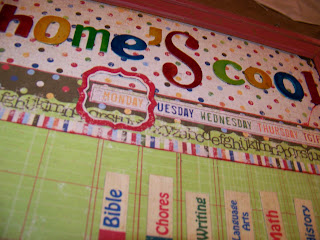 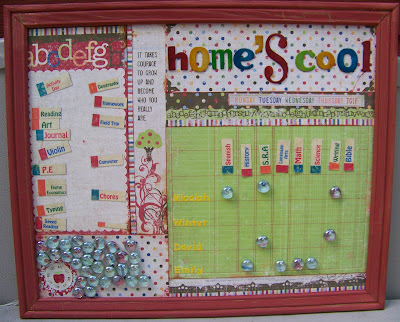