The Green and the Gold

So last year around football playoff time I got into a little bet with my pal Kelly over on Fiskateers. Kelly's from Wisconsin home of the Cheeseheads er Packers. I being a good Chi Town gal am a Bears fan. We tried to see who had the most fans (that would post) on Fiskateers, Bears or Packers. Well sadly my fellow Bears fans were a HUGE disappointment to me and more Packers fans showed up and posted. So I lost. That meant I had to make something green and gold for Kelly.  I knew just the project I wanted to make for her and went out and bought green and gold yarn and was going to start the project for her BUT

Right after that, our family received some bad news that sent us into a spin. Everything stopped for awhile. We needed to not only take in the news but process it and form a plan of action. We then had to make it through the holidays. My project for Kelly got buried under a pile of deadlines and paperwork.

I recently cleaned out my area and found the supplies I purchased for Kelly's prize I had a chance to sit down today and make it for her. 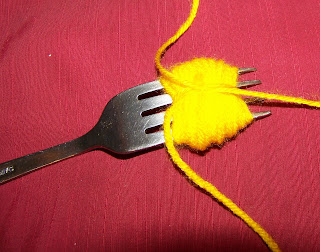 To start I needed mini pom-poms. I had heard it was possible to create them using a fork and wanted to try it because the size would be perfect.

You start with wrapping yarn around a fork 50 times or so (depending on thickness of yarn) thicker yarn 50 thinner yarn could take up to 80-90 times. 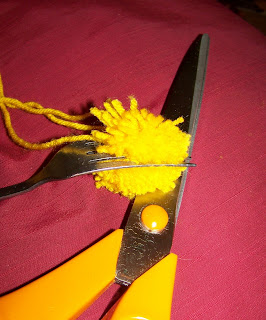 To tie off the pom pom you want to take another piece of yarn about 12-14" long and tie the middle of the yarn. Thread the yarn from between the 2nd and 3rd prongs and up and around the pom pom. Tie it tightly in a double knot. I did this a couple of times. Each time allowed me to get it a bit tighter. You need this to be secure as it will hold the pom pom together. 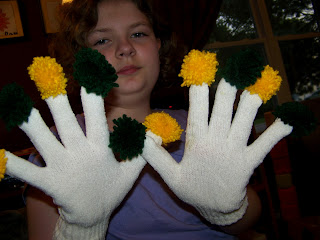 Your finished pom pom will be around 1 to 1 1/2" You can use the ties to tie your pom pom onto what you want to. Or you can do like I did and glue them onto gloves. I made Kelly her very own pair of Packers pom-pom gloves. 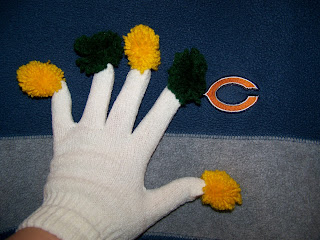