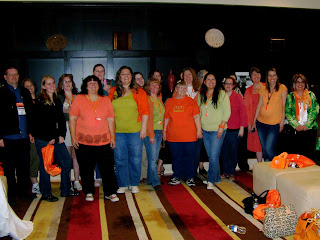 WOW! The craft and hobby trade show is but a memory now and I finally have time to sit down and write a bit about the fun that I had. The night we(Merlene and I) got in (I roomed with Fiskapal Merlene and my new boss from Scrapbook Update Nancy Nally.) Started out with a Fiskateer "Tweet up." We walked down to the hotel lobby (we were staying at the J.W. Mariott) and asked to have them hail a taxi for us. After asking where we were going they said "Oh we'll take you in the hotel car" So we arrived at the Fiskateer party in this

When we pulled up Fiskars President and Vice President were standing in the doorway waiting for a taxi to take them to the Lakers game. They were having a conversation with themselves..."Oh look at that Escalade...I wonder what celebrity is in there...I heard Snoop Dog was in town...wonder if it's him." Then our driver opens the door and Merlene and I get out and they FREAKED and started shouting "Fiskateers are ROCK STARS!" (Not a bad way to start CHA!) (Postscript note, when we saw them later on in the week they told us that story got told at least a dozen times and became an instant favorite...their fiskateers are rock stars!)
Inside the meet up was so fun! It's amazing how close I feel to some of these people. Most of whom I have only met through Fiskateers. An amazing bond happens when you share your lives together through crafting! 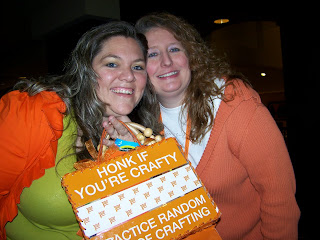 Fiskateer Lead Cheryl Waters and myself.
Among the sea of orange we talked, and laughed and naturally took a million and two pictures. (The group shot was taken by no less than 10 different cameras multiple times.) When we were done we didn't want the evening to end so we headed to a sweets shop called "Louie's" the treats there were amazing (and so tempting) I wanted one of everything to try! 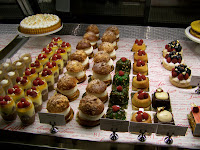 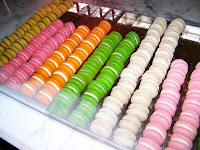 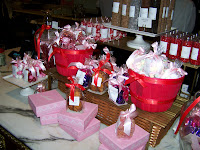 We finally decided on a chocolate rasberry torte (that was out of this world fabulous but ohh so very rich that we couldn't finish it and it was only a 3 inch tart!) We took our treats back to the hotel where we chatted some more. Getting back to our hotel around 11 we new we had to turn in because the show started the next day and we needed our rest, but we were too wound up to sleep and ended up talking some more! Fabulous first day in L.A.
Posted by Betsy at 8:37 AM