Last night I went to a service up in St.Charles. During worship I had an image in my mind that I had to translate to canvas. The image was of an eye full of love. It doesn't sound like much on any given day, but the Lord had been speaking to me the past several days about seeing me through "eyes of love."

You know how when some guy starts liking some girl that no one really expected her to even date someone? But suddenly she has "value" because someone else saw something in her. She smiles a bit more...she is loved. Now the girl that was once 'overlooked' becomes someone desired.


The image I saw prompted this canvas: 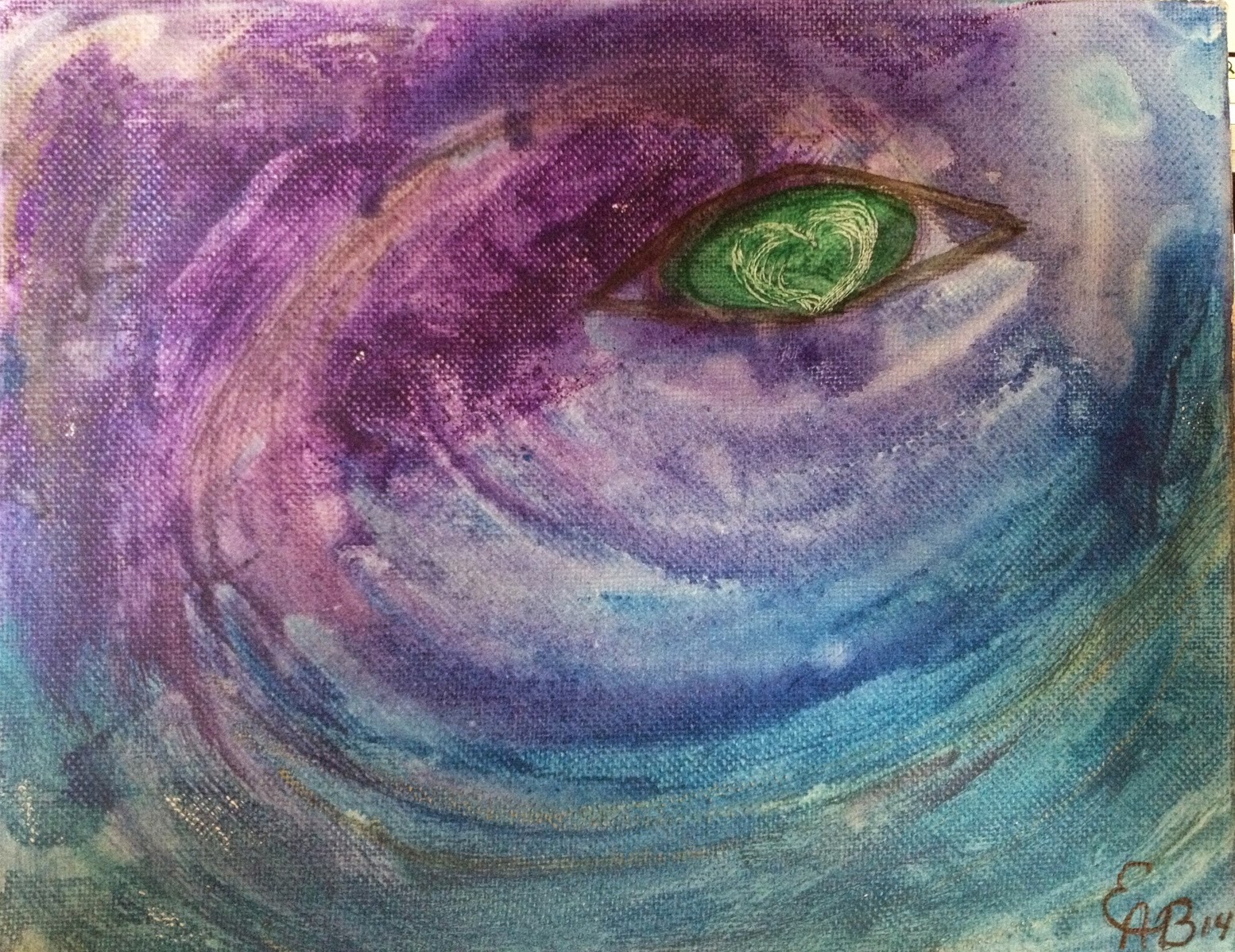 I had to make it to remind me of the lesson I have been learning about how the Lord sees me through his "eyes of love."

Sunday after church while talking to my husband, I had this thought of how much love changes you and changes the way the people around you see you. While pondering this thought the Lord spoke to my heart and said I see you through eyes of love.

I was taken back to a story a fable if you would I had heard of a poor family, they had but one daughter and she wasn't much to look at, her skills were mediocre. It came time for this daughter to get married. Now daughters were a valuable asset in this town. A daughter would work to take care of her parents, and it was the custom that when a daughter got married, the young man betrothed to her would pay the parents to make up to them for taking away the one that would care for them. Cows were the usual means of payment as a bride price, the more cows, the more valuable the young woman to be married.

Now the parents of this young woman feared their daughter-who wasn't much to look at nor really have any skills worth mentioning almost as much as their feared for themselves. Not only would the number of cows given help to take care of them in their old age, but would determine their daughter's worth in society. So it's with much fear they approached the match maker. The match maker new this young woman's time was coming and had already been planning on what to do. Knowing she wasn't much to look at and her skills were just so-so, he was hoping that he could possibly get a goat or two if he was lucky for the parents, and the girl a position as someone's 2nd wife. That would be a little better than being stuck with a girl that's unmarryable.

So the notice went out, and the parents waited to hear back from the matchmaker. As expected, the matchmaker got a couple of offers of flocks of chickens, and a couple of a goat or two to be a 2nd wife. But then something happened that totally surprised him. Unknown to the girl or her parents, there was a young man who had been secretly watching the girl from afar and had fallen in love with her. He wanted this young woman for his bride and made an offer of 10 cows, an unheard of amount in the village. A cow's value was wages for a year because of the food it could produce, 10 cows was unheard of. Thinking it was a joke he almost didn't take the young man seriously, but finally the young man convinced him of his love for the girl and his desire to have her as his bride. Now it was the match makers turn to offer some advice…"Surely you could get her for much less, how about only offer 1 cow and keep the remainder of your wealth." "But if I only offer 1 cow, how would she know her true value to me?"

So the matchmaker brought offer to the stunned parents and naturally they accepted. Soon the whole town heard of the young mans offer they were stunned as well as no bride had ever gone for that amount before in the history of their village. Who was this woman? What could she possibly have that would be worth so much?  They started looking for things in this young woman that could make her so valuable. As they started looking, they began seeing.  The young woman when she learned of the offer was almost instantly changed. The face that was once 'not much to look at' became radiant. Her skills that were only mediocre, became unsurpassed. The young woman that was once though of as having little value became transformed almost before their eyes.

Years later someone asked the man why he paid so very much for his bride, and his answer astonished the one who asked." My bride was more valuable to me than anyone could imagine, for I loved her. Where the village saw her as not much to look at, I saw her as radiant. Where her skills were seen as mediocre, I knew she was highly talented and just needed confidence. I knew all she needed was to see her beauty and her value through my eyes. As she began to see herself through my eyes, she would be transformed into the woman she was created to be."

So many times we allow our value or worth, to be determined by how others see us. We are too fat, too thin, ugly, scarred, wounded, broken, ashamed, unlovable to be of much value to anyone. But then Jesus comes. He doesn't see us as ugly, he sees us a radiant, he doesn't see us as wounded, he sees us as healed, he doesn't see us as broken he sees us as whole. He sees us through eyes of love and what we were created for. Because of the value he sees in us, because of the love he has for us, he offers us the highest bride price imaginable, his very life. When we accept that bride price and start seeing ourselves through his eyes of love, it transforms us into who we were created to be.

Posted by Betsy Burnett at 7:43 AM