Halloween always seems to sneak up on me. Partly because it's off my radar with being so immersed in "shoebox season." This year though provided to be a bit more of a challenge because while one child said "mom I want to be "Riversong" (from Doctor Who) the other didn't mumble a word to me about his choice in costume.


Thusly I found myself, putting together costumes last minute for the costume dance at CYCM.  My daughters was simpler, we did a google image search on Riversong and then used those outfits as reference when we cruised the local thrift store. A khaki jumper, wonderfully detailed belt, and a couple of additional belts to make a holster for a laser gun. Gave us a good start on completing her look.

My son on the other hand has a bit more difficult. The day before he mentions "well maybe I would like to be Robin Hood"  (because he found a really cool feathered hat at a free sale) So Supermom to the rescue. I picked up some green fabric, and then during our homeschool group, I cruised to the sewing room and whipped up a simple tunic and twisted yarn belt. Adding a brown long sleeved shirt finished the clothing part of the costume over jeans since he refused to wear tights...geesh! I picked up a toy bow and arrow set at a local Ben Franklin making a simple quiver out of a "tube box" to finish off his costume. 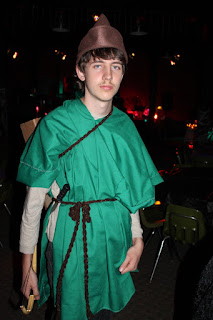 Kids being finished, it was time to start my costume. I knew what I had wanted to be for awhile. I really wanted to create a giant shoebox costume. I knew I could use it not only for the costume dance at the youth center but I could use it during our packing party. The main problem was finding the right sized box! After cutting a few holes, a simple coat of paint,  paper cover for the box top and blowing up the logos on the copy machine and voila` I became an Operation Christmas Child Shoebox Gift! 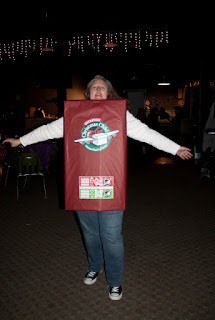