I had the privilege  of traveling to Paraguay with Operation Christmas Child. While many of you are thinking "Paraguay" who would think of going there. For me it was the perfect place to see first hand the impact of a shoebox gift on not only the churches, schools, medical centers, feeding programs, etc. that we partner with to get the shoebox gifts into the hands of the children. But see first hand how these shoebox gifts are bringing joy to children!

This is the first in a series 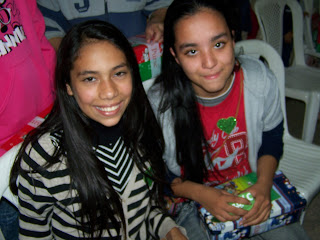 of many memories of Paraguay!

The noise in the building was deafening! The pastor of the church had encouraged the children to use their shoeboxes as drums. Imagine 300+ children pounding on boxes to create a drumroll! Finally it was time “UNO….DOS….TRES” It’s hard to tell who is more excited at that point, the children opening the boxes or the volunteers and staff filming and taking photos. Excitedly children are tearing into their boxes, Shouts as they received crayons and school supplies, toys and even a prayed for soccer ball!

As I was walking through the crowded room exclaiming over treasures shown to me by children I am stopped by a girl. Her name was Ariel, she is 12. Ariel taps my arm and shows me her box, I expected to be shown some great treasure, and instead I notice a look of sadness on her face. You see Ariel’s box was covered in melted candy. The t-shirt, the notepad, the crayons and pencils, the stickers and toys, everything was covered in a sticky goo. Even with my limited Spanish vocabulary, I could tell she was asking me to “fix it!”

I looked at the label on her box and questioned “Nino?” she had for some reason been given a 10-14 y/o boys box, upon further inspection I noticed everything in the box was designed for a boy from the candy covered toy, to the candy stained t-shirt. Knowing that for some reason at this distribution we actually had a few extra boxes, I set out to see if anything could be done. I went up and explained what had happened. This girl had received not only a boys box, but a boys box covered in melted candy, since we had extra girls boxes, could I possible exchange it?

I was given the go ahead and excitedly brought the new box back to my friend. I gestured to her…”Wanna Trade?” and a huge smile lit up her face. I told her that I only had a 5-9 y.o. girls box would that be OK?  She handed me the other box and excitedly grabbed the new one from my hands.

The first thing she saw when she opened the box was a fun pair of ladies sunglasses. You would think with it being a 5-9 box there would be “child’s items” in the box, but somehow God knew. Everything Ariel pulled out of her box was packed with an older girl in mind. She stood up, kissed both of my cheeks and said “Gracias!” and gave me a big hug!  It may have taken an extra step, but God got the right box into the right child’s hands! 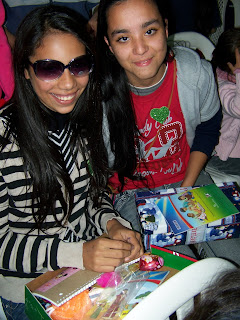 There could be so many lessons to this story. The two that stick out the most "Pray and pack, and pray" Connect with God and have Him lead you with what's to go into a box and then pray again for the heart of the child receiving a box. Since we know God answers prayers He will get your box into the hands of the right child.

The second lesson being, sometimes you have wait. What you are suppose to receive might take a little longer to get to you than others, but if God's involved...it's sure to be perfect!

SaveSave
Posted by Betsy Burnett at 12:09 AM